The Buried is a Wretched and Alone game, based on the SRD by Chris Bissette. In this solo journaling game it begins with you trapped underground, and you will struggle to make it out alive.

“Why’ve yall stopped digging?” bellowed McManus from down the tunnel. He was bigger than most, but most of that bulk was fat. It had been years since he’d had to pull a full days work in the mines, and he made sure it showed.

Siema pointed over to the...thing. “That’s why.” Siema was almost as big as McManus, and his bulk came from muscle. He was the only one who dared bow up at the tyrannical shift leader, and everyone knew there was a reckoning coming one day soon.

McManus sauntered over to the end of the tunnel and for a moment even he was stuck silent. They were a good half mile below the surface, a place where their digging had made it clear no man had even set foot before. So how there could be a half revealed stone doorway, one with swooping spiral sigil that drew the eye, yet made your brain want to scream in pain, no one had been able to say.

After a moment McManus spat, and a hint of greed began to show in his eye. “Keep digging. Lets see what’s behind that door.”

Seima shrugged, and swung his pick.

That’s the last thing you remember.

Time has passed, you can feel it. But it's dark, with only the pale glow of your headlamp to provide any illumination. There was a cave in, that much is clear. Dust fills the air, and you can see a few bodies lying about. Some of your shift, but not all, not by a stretch. And from the way your head hurts you can tell you took a pretty nasty knock.

You are in a tunnel though. But clearly not one carved by you or your coworkers. This must be what was beyond that door...though where is the door? Is it under the cave in? And where is everyone? Under the rubble...or have they followed the tunnel looking for a way out?

You do know one thing: your bosses are probably not going to waste the energy trying to dig out a team of miners in a mostly played out shaft, when there are a thousand more waiting to take your place. They’ll just try another shaft, and hope to strike more gold that way. If you want to get out, you’re going to have to do it yourself you think.

These tunnels though...you’ve never seen anything like them. They look carved, but not by tools. They look as though they have been clawed into existence, though what could claw through granite like that, you haven’t a clue. And scattered throughout are small piles of bones...and some look to be human. What is this place?

The Buried is a Wretched And Alone engine game about being stranded underground in a set of eldritch ruins.

It's 11 pages, with no interior illustrations but with an easy to read layout, and it sticks pretty closely to the Wretched's formula. You play with cards, a d6, and a jenga set, and you alternate between journaling and attempting to make a grim and desperate progress towards salvation.

The game's big deviation from The Wretched is its darkness mechanic. In addition to your other problems, you have a set quantity of juice in your headlamp, and some cards have an additional effect if you don't spend a charge of light when you're drawing them. I thought this was a really cool twist, but not a lot of cards interact with it, and I would've liked to see that kind of supply management used more---even though it runs against the grain of the enforced helplessness that The Wretched really wants to channel.

Also, for all the really cool possibilities it implies about the setting, The Buried never digs super deep into that either. It's atmospheric as all heck, but you don't really get a payoff to the ruins, just some indications that occult hijinks are afoot.

Structurally, I think The Buried takes a solid and interesting step away from The Wretched's formula, and I'd love to see it commit even harder to those deviations. Things like a basecamp, supplies, items you can construct, maybe even a transition to a second deck and a second phase of play once you discover the heart of the ruins---there's the potential for all of these in The Buried. They'd steer The Buried more towards classic survival horror, but it felt to me like the game would be more comfortable there.

Overall though, if you're looking for a suspenseful journaling game---and one that's a bit less bleak than The Wretched---I'd recommend checking this out. It's got an extremely strong atmosphere, the darkness mechanic is neat, and the encounters on the cards are quite good.

Thank you so much for the in depth review! I appreciate the time you put into it, and I definitely be taking your suggestions when I eventually go to rework the game. Cheers!

It's a really cool game! If you do a rework or something else in the same style, please let me know. I'd be happy to buy a copy. 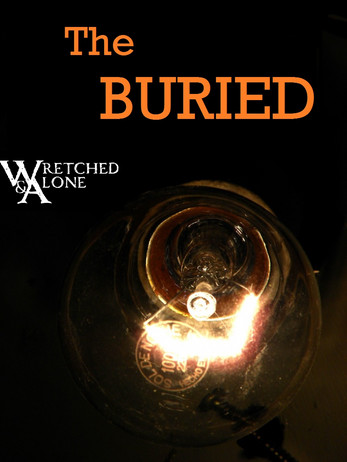